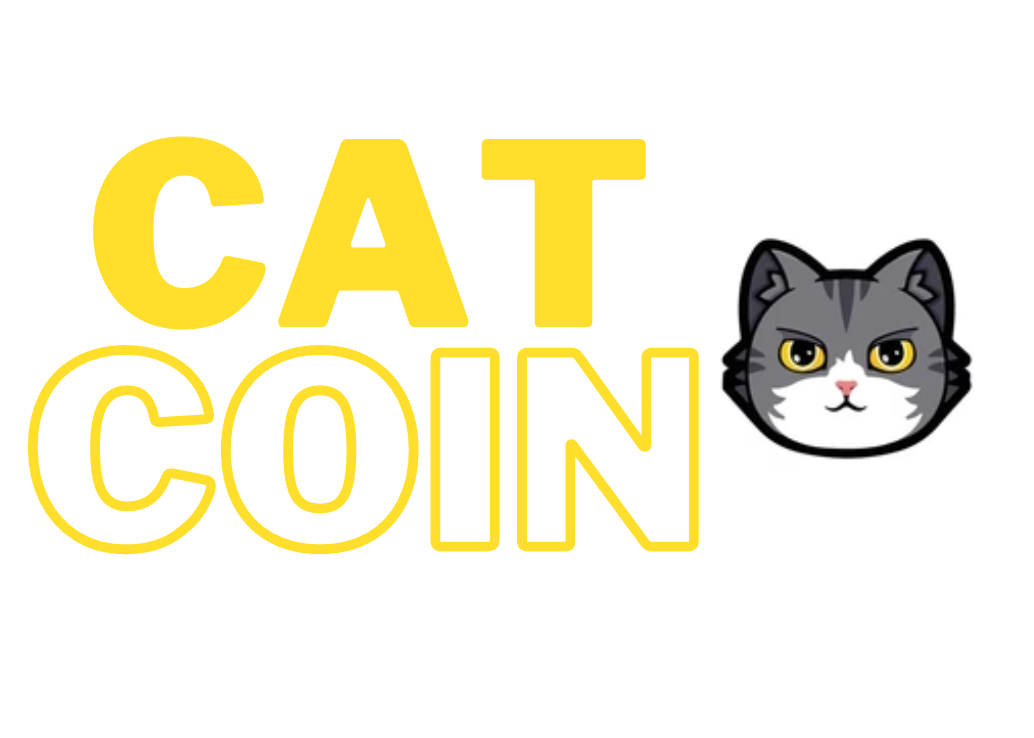 Traditional currencies used to be based on a physical commodity such as gold, and some people believe that is still the case. It is not. For many decades now, traditional currency has only had value because people trust the government printing it. This is not a joke; money is only backed by a government’s word. Thus, cryptocurrency by definition is nothing less valuable or real than fiat currency.

And with hundreds of crypto coins emerging, a portion of them was created as a joke or a meme. Interestingly enough, they are not a joke as their value is very real and tangible since they can be exchanged, staked, or traded for fiat currency on the market. Such is the coin that we’ll review today, called Cat Token (CAT). A community-driven coin that originated from a meme, but started gaining popularity on the market among like-minded young people.

What is Cat Token?

Unlike utility tokens which perform a specific function in the crypto world (Bitcoin, Ethereum, etc.), meme tokens are just there for trading. The idea behind this token is a very sweet and caring one. Cat Token (CAT) is a coin originally designed to gather cat lovers among crypto nerds and traders, promote better treatment of cats, and develop charity projects that are meant to save cats. It originally started on the Ethereum blockchain in August 2020. The ultimate goal? To launch NFT cat trading cards and spread the meow across the blockchain. The business motto? As long as people love cats, the CAT will live. Sounds legit.

The CAT token mascot is called Mooncat and is a sort of antipode to the Doge of Dogecoin (also started as a joke but is now a meme-coin with serious value). The active community often publishes artwork and comics featuring Mooncat on Twitter.

The starting market cap was 15 million, but the creators listened to community opinion and cut it down to 11 million total. This is split between the Uniswap liquidity pool, events when coins are given to the community, marketing expenses, and the creators themselves. CAT is not inflationary (rewarding miners), instead, they reward devoted and loyal holders.

A great characteristic is that the community gives their thoughts (mostly via Telegram and Twitter) about the course the coin and the team should take. They say that by pitching good ideas, anyone can advance in this community and be heard.

CAT tokens can be held on any wallet supporting the Ethereum blockchain (ERC-20). There are several options, such as Coinbase and Metamask. You can currently buy CAT on three exchanges: Uniswap, Crex24, and Bilaxy. 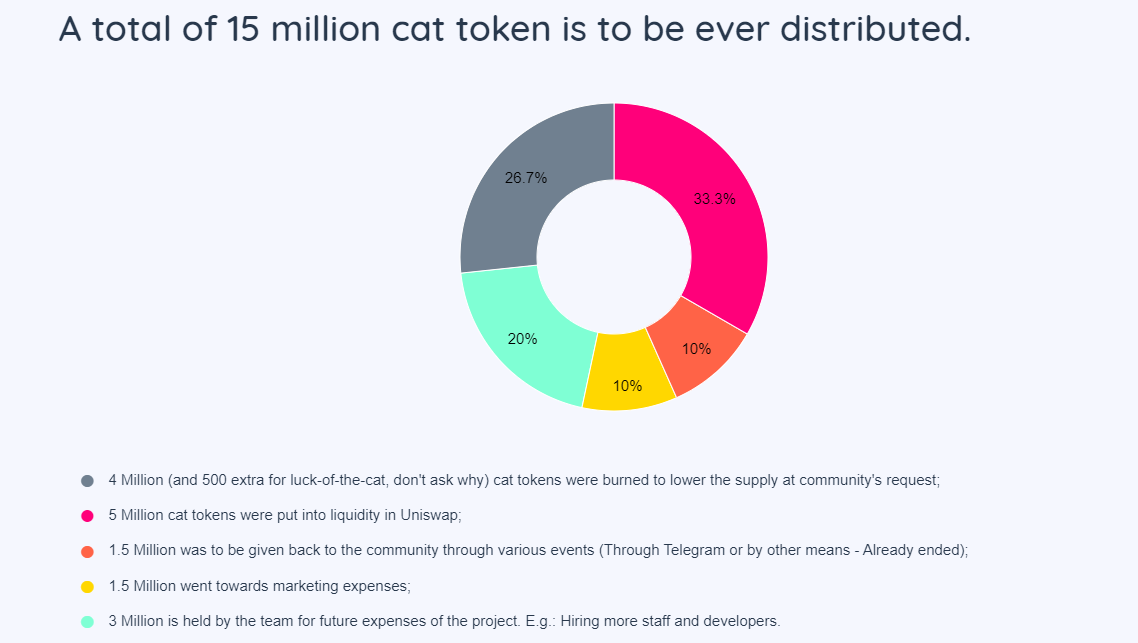 CAT token has come a long way. The project has launched a v2 contract. This means that you can swap between ERC-20 tokens in a direct way on Uniswap. You do not trade with other holders one on one, but from a token liquidity pool that is created.

There is no known owner anymore, and the decisions are made by 15 core team members whose identities and activities are completely transparent. The community is growing every day, reaching 20.000 members on Telegram.

The charity projects are being pushed forward, and veteran programs will be added to the already functioning stray cat projects. The team is partnered with five exchanges at the moment and CAT is considered to be tier 2. Their current main goal is to reach tier 1 listings.

The team acknowledges the current bear market, but is motivated to bounce back with new projects.

The relevant numbers are in average numbers on the recent trend lines, which shows that after a rather big decline at the start of 2022, CAT mostly fluctuated between $0.10 and $0.20 throughout 2022 and has been relatively stable at 15 and lower after the first quarter of the year. Furthermore, the total number of CAT circulating the market is 6.5 million.

This coin can be a low-cost investment with high potential if the value rises. The community is certainly great and that seems plausible. However, volatility is ever-present and especially so with non-utility coins.

Some also accuse the meme token of being a scam, which is nonsense since the members and the people trusting it actually create value, but it may still hurt the value if false rumors spread.

As for hearing predictors’ opinion, we have chosen three sources: Digital Coin Price, Price Prediction and a mix of independent online rumors, such as forums, FAQs, and crypto help sites. Digital Coin sees it around 0.22$ in 2023, then 0.30$ in 2024, continuing to increase gradually and hit close to $1 at the end of the decade.

Price Predictions have a similar forecast. They used the coin’s history data together with AI that implements other market variables and trends, and found a similar increase as Digital Coin did, just a little less steep – 0.26$ in 2024.

Within the third predicting body – “the community mix”, a small percentage of users are either hyping it or calling it trash. Most users see this meme coin as having the potential to rise, but also underline high risk when investing in meme coins. 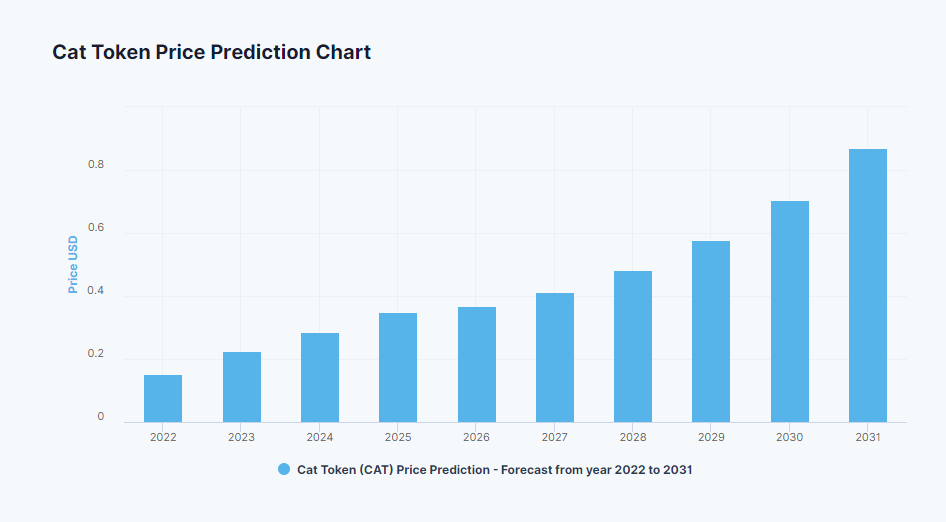 When utility tokens’ utility starts weakening, they more or less die down slowly. With CAT token, there’s no real threat of this happening as long as the community is pushing it forward. At the end of the day, all coins have the potential to grow, it just depends on the community and the belief in it. We acknowledge the warmth and the honest idea behind this coin, and really root for it in the future. As for suggestions, it may be a good investment, just don’t take it too seriously and dump too much money that you can’t cover.

According to a CAT team member at Crypto Expo Dubai 2022, they are cat lovers among big dogs in the market. And everyone loves cats. We concur. 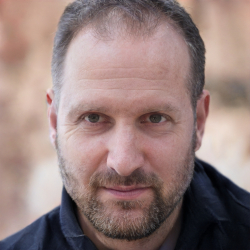 Joseph Moss
Joseph Moss is an experienced ICO investor and blockchain enthusiast. He got interested in cryptocurrency and blockchain technology in late 2017 and started investing in early 2018. He has since participated in a number of successful ICOs.

Joseph is excited about the potential for blockchain to revolutionize many industries, and he looks forward to seeing more innovative projects come to market. He believes that blockchain technology has the potential to improve transparency and trust among businesses and consumers worldwide. 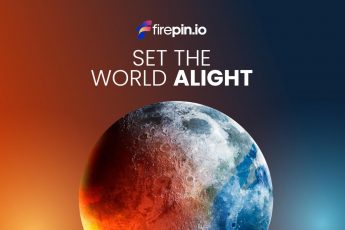